Typographical errors are not just a concern for fastidious grammar geeks and English teachers. They can have a real impact on your business and your reputation. They can suggest a carelessness that might reduce your credibility, and could result in factual errors that could have practical implications. Understanding a bit about how the brain processes written words—coupled with some simple proofreading tips for business professionals—can help prevent these problems. 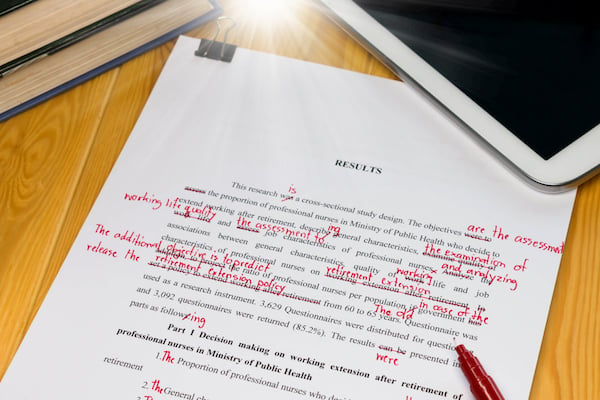 How the Brain Processes Written Words

One example of how the brain processes written words is the internet meme that reads:

“It deosn’t mttaer in waht oredr the ltteers in a wrod are; the olny iprmoetnt tihng is taht the frist and lsat ltteer be at the rghit pclae.”

(Translation: It doesn’t matter in what order the letters in a word are; the only important thing is that the first and last letter be at the right place.)

While the claim in this meme isn’t completely true, it’s a useful example of how the brain works and why we often fail to identify typographical errors in our own writing. It turns out that our brains are just doing their jobs: making sense of the world for us without bothering us with all the details.

When we write, our intent is to convey meaning (a high-level task), not to simply string together a set of characters. The brain generalizes the component parts of the written word, such as letters and words. When we proofread our own work, our brain already knows the meaning we’re trying to convey, so it will often gloss over typos.

The usefulness of this cognitive behavior should be obvious.

The brain’s capacity to seek meaning is very helpful, for example, when you're reviewing the substance and clarity of a critical document such as a resume or CV, a sales proposal, a letter to your boss, or a note in the medical record, but it’s not very helpful when you're proofreading to eliminate typos so that your final text is professional and polished.

Typos Can Cause Real Harm to Your Business

Because the brain has a tendency to generalize the component parts of language, proofreading your own work is not an easy task, since the details are precisely the things proofreading looks for but the brain ignores. And this has nothing to do with intelligence or education or even writing ability. Even professional writers, editors and best-selling authors—trained and accomplished specialists in the written word—find it difficult to proofread their own work.

Here are just a few ways that typographical errors can and have caused great harm to businesses:

Business professionals don’t usually have access to full-time editorial teams, so they need to employ techniques—and sometimes third parties—to help identify typographical errors. The proofing tools in word processors such as Microsoft Word are much better than they used to be (especially if you enable their grammar-checking features to catch frequently misused words such as its and it's) and are a good starting point, but they’re not sufficient. They aren’t always available (or may not be as robust) in software such as an EHR or an online content management system such as WordPress, they often overlook autocorrect fails, and they’re never available for printed text.

1. Set It Down and Walk Away

If you have the luxury of time, set the writing aside for as long as you can (preferably with an intervening night’s sleep). When you come back after a few hours or days, your brain will be less familiar with it, and you should be able to catch the more obvious typos.

Especially coupled with the first recommendation, slowly reading the text out loud—being careful to enunciate each word—will help you identify typos you might otherwise miss, especially repeated and missing words. This will also help you identify where the difficult passages are or where there is a lack of clarity. Writing that’s easy to speak is usually easy to read. Reading aloud is also a great way to identify autocorrect fails.

Ensure correct use of similar and oft-confused words such as they’re, there and their; it’s and its; and too and to. As stated above, spellcheckers and grammar checkers are a great starting point, but they still miss some things. Also, systems that only check spelling may miss misused but correctly spelled words. For example, their are two typos highlighted in this sentence, but its hard for some spellcheckers to identify them since the two words are spelled correctly, though used incorrectly (and Microsoft Word failed to identify the second one in a draft of this article).

Try these mental substitutions to test usage of these words. If the sentence is grammatically correct after making these substitutions, your usage is correct. If not, make the proper correction:

4. Request a Review by a Colleague

Since your colleague wasn’t involved in writing the article, they won’t know what it’s supposed to say, so their brain will pay closer attention to details to seek meaning and will catch more typos. And if one reviewer is good, several are better. If you have several people in your office who write important documents, you could serve as proofers for each other. As a bonus, if they have a general understanding of the topic (but have never read the actual document) they could also identify places where your writing might not be clear, even if it is typo-free.

5. Use an Online Proofing Service

Because of the added costs and lead time, it’s probably not practical to pay for proofreading of everything you write, but the minimal cost might be worth it for critical writing projects such as a resume, a CV, an article you’re submitting to a journal, or a critical staff memo. For an additional fee, proofreading services often also offer substantive review services (and by subject matter experts when available) in which they review the writing for meaning and clarity beyond identifying typos. As just one example at the time of this writing, ProofreadNOW.com will perform a basic proofread of a 1,000-word document (a bit shorter than this article) for $25 and return it within 24 hours.

If a piece of writing is important to your professional reputation or your business’s bottom line, it’s well worth the extra time—and with third-party proofing services, the extra cost—to ensure error-free text. Coupled with modern spelling and grammar checkers, using these proofreading tips with everything you write will boost your reputation as a writer and prevent the kinds of typographical blunders that can diminish your professional reputation and possibly your bottom line.