To “indemnify” or to “hold harmless” means to insure another party’s risk. Indemnity clauses appear in a wide variety of business contracts, including those between physicians, their groups, and the hospitals in which they treat patients. When a physician signs a contract to join a medical group, and the contract has indemnification language, the physician may be agreeing to take responsibility for the group’s malpractice liability if both are named in a lawsuit. Consequently, physicians should be wary of signing any contract with an indemnity/hold harmless clause. 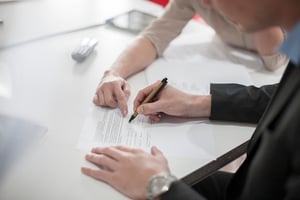 If a patient files a medical malpractice case against a physician, and alleges vicarious liability against the physician’s group, and the physician signed a contract agreeing to indemnify the group, the physician may have agreed to pay for the group’s attorney fees, court costs, verdict, or settlement.1,2

In general, malpractice insurance policies do not provide coverage for indemnification agreements.2 For example, NORCAL Group medical professional liability policies exclude any liability that an insured has assumed under a written or oral contract or agreement, with few exceptions. Consequently, in many cases, indemnity agreements create an uninsured risk for the physician who signs the agreement.

Frequently, contracts appear to make the liability obligations mutual. Using the above example, the group may also agree to indemnify the physician. But the nature of malpractice litigation can undermine any apparent obligation this creates on the part of the group. Plaintiffs rarely allege primary negligence on the part of the group and then claim the individual physician has vicarious liability.2

Indemnity/hold harmless clauses take a variety of forms, use a variety of terms, and create a variety of obligations. The words “hold harmless” and “indemnify” do not have to be in the contract clause to create a duty to indemnify. The following are examples of what an indemnity clause in a contract between physicians, groups, and hospitals might look like.

Indemnification by Physician [Group] of a Hospital

Physician [Group] shall indemnify and hold harmless Hospital, its Affiliates, and their respective directors, officers, employees or agents, from and against any and all claims, causes of action, liabilities, losses, damages, penalties, assessments, judgments, awards or costs, including reasonable attorneys’ fees and costs (including the reasonable costs of Hospital’s inhouse counsel), arising out of, resulting from, or relating to (i) the breach of this Agreement by Physician [Group] or (ii) the negligent acts or omissions of Physician [Group] or any employee or agent of Physician [Group].3

Indemnification by Hospital of a Physician [Group]

Hospital shall indemnify and hold harmless Physician and Group from and against any and all claims, causes of action, liabilities, losses, damages, penalties, assessments, judgments, awards or costs, including reasonable attorneys’ fees and costs, arising out of, resulting from, or relating to (i) the breach of this Agreement by Hospital, or (ii) the negligent acts or omissions of Hospital or any employees or agent of Hospital in the performance of Hospital’s obligations under this Agreement.3

Indemnification by Physician of a Group

Physician agrees to indemnify Group from all liability, loss, damage, or expense, including court costs and attorney’s fees, which result from the alleged or actual negligence or intentional acts of Physician in performance of this Agreement including losses solely due to the acts or omissions of the Group.3

The ED group had agreed to indemnify the hospital for all of its defense costs associated with defending the lawsuit filed against the hospital and the group’s physician who had treated the patient.

An emergency department (ED) physician was part of a group that contracted with a hospital to provide emergency medicine services to patients. Within the contract between the group and the hospital there was an indemnification clause stating:

“Group agrees to indemnify Hospital from all liability, loss, damage, or expense, including court costs and attorney’s fees (or upon the option of Hospital, Group shall provide a defense to Hospital), which result from the alleged or actual negligence or intentional acts of Group and its members.”

The ED physician failed to diagnose a patient’s condition, which resulted in the patient sustaining significant injuries. The patient filed a lawsuit against the ED physician, group, and hospital.

The hospital demanded, pursuant to its contract, that the group indemnify it for any costs, etc., associated with defending the lawsuit. The group’s liability insurer refused to indemnify the hospital based on an exclusion in the group’s insurance contract stating:

“We will not defend any claim, nor will we pay any damages, defense costs or additional benefits for a claim, arising out of, directly or indirectly…any liability that an insured has assumed under a written or oral contract or agreement.”

The group’s governing board was unaware that, through the indemnity clause, they had agreed to pay for the defense of the hospital. They also had not connected the indemnity clause to the exclusion in their medical liability policy. The group was surprised to find themselves in a situation in which the group’s assets could be at risk. Defense costs and indemnity payments that were not covered by insurance could force the group into bankruptcy. The fear of bankruptcy put the group in a weak position when it became time to consider whether the case should be settled.