In the following case, the group’s medical director over-utilized medical assistant (MA) externs for cost-saving purposes. Because he did not understand how his plan was putting patients at risk, he was resistant to negative input from his colleague. The physician conflict exacerbated the inherent risks of the externship program. 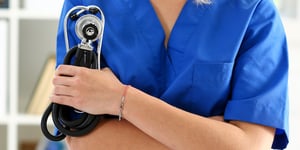 The group did not have proper oversight of MA externs, which resulted in an adverse event.

A busy family practice group was composed of two physicians, their two MAs, a billing manager, an office manager, and a part-time human resources (HR) person, as well as various medical assistant externs. Physician 1 was the medical director of the group. Neither of the physicians reported to the other or to any other person.

The practice had a robust MA externship training program. During office hours there were four to five externs working on administrative or clinical tasks. Externships generally lasted two months; consequently, there was a constant flow of individuals with varying degrees of competency cycling in and out of the office. The HR person had complete control over the externship program and received no direction or input from the medical director. She recruited, oriented, and trained the externs. When the HR person determined an extern had been adequately trained to do a medical task, an MA could then delegate the task to the extern when one of the physicians ordered it. Neither MAs nor physicians supervised the externs when they were completing tasks for which they had been deemed competent by the HR manager.

According to Physician 2, the practice had more externs than it could handle, the program was not appropriately administered, and many of the externs were incompetent. She avoided using externs whenever possible and denied any responsibility for supervision or training. She assumed the externs were overseen by Physician 1. She had complained to Physician 1 about the externs, but Physician 1 refused to discontinue or reduce the use of externs. The extern situation was driving Physician 2 to seek a position elsewhere.

Physician 1 believed the externs provided an economical workforce for the group, and they obtained valuable training in return—a “win-win” situation. He felt Physician 2 was overreacting to small issues with a couple of externs who had made regrettable, although minor, mistakes with no lasting consequences to patients.

A long-term patient of Physician 2 came in for ear irrigation. Physician 2’s MA was not available. Unbeknownst to Physician 2, the irrigation was delegated to an extern. The extern punctured the patient’s ear drum. The patient sued both physicians and the group.

Although both physicians denied involvement in the training or supervision of the MA, according to defense experts the physicians were ultimately responsible for what their MAs—or the MA externs to whom a task has been delegated by their MAs—did or didn’t do with their patients. The experts believed both physicians should have been more involved. For example, the experts believed unsupervised ear irrigation could be within the appropriate scope of practice for an MA extern, but the physician who ordered it would have to be satisfied that the extern was capable of unsupervised ear irrigation.

Competency judgments are generally the result of personal observation and discussion with other staff members in the office who have appropriate qualifications to evaluate MA extern competency. But in this case, neither physician had made any determinations about the competence of any of the externs with whom they worked. Had they observed the MA who caused the eardrum injury, they might have provided the guidance necessary to avoid patient injury. Experts believed the MA extern’s ear irrigation was below the standard of care.

Another problematic issue was that the medical director (Physician 1) was unfamiliar with the operation of the group practice. He was unable to clearly answer questions about reporting relationships, oversight, and supervision. He had to defer all questions about the externship program to the HR person. Unfortunately, the HR person’s records were incomplete—there were no copies of agreements with the externs (the paperwork was completed by and retained by the trade schools from which the externs were recruited) and supervision and evaluation documentation was sparse. This made it extremely difficult to locate the MA extern who did the irrigation. (The MA’s externship was long over by the time the matter was litigated.)

The case was settled on behalf of Physician 2 and the practice.

The purpose of an unpaid educational externship is for the trainee to learn about the medical practice. However, delegation of duties to externs should only occur under appropriate circumstances. Physicians who absent themselves from determinations of the competency of externs who treat their patients are exposing their patients to potential injuries and exposing themselves to liability risk. Consider the following recommendations:1

Patient safety and risk management depend in part on physicians sharing a common vision of the practice and managing conflict when differences in the understanding of that vision arise. Consider the following recommendations:2,3