The use of social media in healthcare settings has expanded far outside the scope of marketing. Today, physicians are increasingly using social media for professional networking, communicating with colleagues, collaborating with researchers, improving patient outcomes, and professional development. 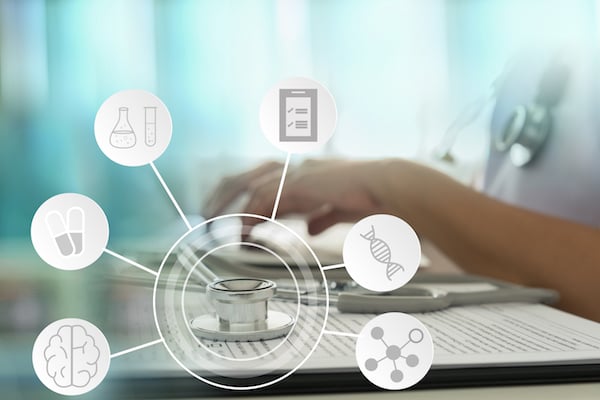 Social Media Growing as a Professional Tool In Healthcare

Much of the initial physician interest in social media was rooted in social media’s potential for medical marketing and practice building to help build or establish their practice's reputation. Indeed, in healthcare reputation matters more so than in any other industry.

This recognition of its use as a reputation-building tool is leading to increased interest among physicians for using social media for professional networking in healthcare. Medical practices are using social media to communicate about developments in their fields more each year. The information shared on social media can include cutting-edge discoveries and important news topics that are relevant for both patients and colleagues. Opinion leaders on Twitter have a significant impact on discussions of medicine. As information is increasingly distributed via social media, by not participating in social media platforms you could risk missing critical information and being absent in important conversations where you could make meaningful contributions.

Events including seminars and conferences also now often provide ways to attend relevant activities virtually via social media. Research has shown that Twitter use among physicians has spiked during medical meetings. Thus, rather than spend time traveling to events, social media provides a way to efficiently engage with attendees and ensure that you have access to key information that is shared at those events.

A number of different medical specialties are also embracing social media as an important tool for continued medical education and knowledge sharing across clinical and research areas. Much of the push to engage in social media has come from professional medical societies, who encourage their constituents to avoid missing out on what social media has to provide.

One of the most obvious benefits of social media is the ability to rapidly and easily distribute information. While people are increasingly using social media to communicate with friends and loved ones and to digest news and cultural trends, professionals are finding ways to use social media to make aspects of their jobs easier.

Oncology researchers recently published an article in the Journal of Oncology Practice where they explain that social media platforms like Twitter are becoming important places for “instantaneous scientific dialogue.” Though physicians have been behind the curve compared to professionals in other industries, they have begun in recent years to recognize and acknowledge that social media may be advantageous for them in certain contexts. One such physician is Matt Dull, who has noted that he uses Twitter to find everything from journal articles to medical blog posts to discussions covering new therapies.

A number of medical specialties are improving the quality of research through social media, both by enhancing participation in clinical trials and by gathering data directly from the content contained in social media posts. As social media becomes more embedded in the research process and its value to clinical researchers grows, it may become difficult to do cutting-edge research — and to disseminate the results as broadly as others — without social media. According to Dr. Jason Frank, within the next 10 years, it will be impossible to be successful as a scholar without engaging on social media.

A study published in the Journal of Pediatric Urology showed that when those who published in pediatric urology used social media, they were more likely to have a higher impact factor. Impressively, over the 4 years of follow up, this increased impact factor was sustained. Consistent with this idea, a study published in the Journal of Medical Internet Research showed that articles that were tweeted frequently were 11 times more likely to be cited by other authors than those that were tweeted less frequently.

It is not only important for researchers to use social media to stay relevant but also important for clinicians who have to stay educated on research relevant to their practice. Just as news from conferences can be spread to people who are not in attendance through social media, so too can snippets of the latest research and news associated with each medical specialty. With some physicians using social media to efficiently digest educational information, those who shy away from social media will inevitably fall behind in what they know and how quickly they know it.

According to a recent publication in the Journal of Pediatric Orthopedics, the rapid rate at which patients and their loved ones are increasingly using social media is a critical factor in the healthcare industry that cannot be ignored. In 2016, Wong and colleagues, in an article published in Healthcare, explained that social media can work as an important conduit for educating people about their health. Last year, a publication in Chest explained how the American College of Chest Physicians had in 2013 launched the hashtag #pulmccc for a Twitter chat series aimed at educating and advocating for issues related to sleep medicine, critical care, and pulmonary medicine.

A recent study in the American Journal of Health Education suggested that even Pinterest, a social media platform that is less frequently associated with most areas of medicine than other platforms, was a useful way to educate women who were suffering from or at risk for chronic obstructive pulmonary disease. Another study, published in Epilepsy and Behavior, explained that Pinterest can be used to advocate for neurology patients.

One major problem with the digital age is the low barrier to entry with which creators of information are faced when publishing content on the web. The result of the current system for publishing online has made it so that there is a high volume of inaccurate information. For technical areas like medicine, it can be incredibly difficult for people to distinguish between reliable information and information that is not based on evidence. Given the amount of inaccurate and potentially harmful medical information on the web, many people feel that it falls on physicians to crowd out this information with better, credible, authoritative information.

Education is not the only benefit of social media for patients. Today, largely due to patients’ experiences in other industries, they expect much more and better communication from their health care providers. Without this high-quality communication, it is difficult for patients to trust their physicians, and when trust is low, patients are less likely to take seriously their healthcare providers’ opinions and recommendations. When this is the case, patients often visit their physicians less and adhere to their medical suggestions at lower rates.

Launching a healthcare blog and engaging in social media can help physicians to both educate their patients and help them build trust in their providers. Blogs and social media are also a more feasible way to build sustained engagement with patients than in-person strategies that are very time consuming. The ability of physicians to document their points and expertise once and then simultaneously reach many patients makes this mode of communication highly efficient. Indeed, even patients’ families report wanting access to relevant online information in the face of medical issues.